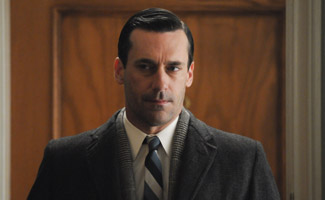 This week, Matthew Weiner wins an International Emmy Award, while Jon Hamm is returning to NBC’s Parks and Recreation. Plus, Bustle tells viewers how to bide the time before the final episodes. Read on for more:

• Matthew Weiner, presented with an International Emmy Award by Christina Hendricks and John Slattery, describes his Mad Men cast members as “human vehicles who are so beautiful and so deep and never stop feeling,” The Hollywood Reporter says. The Associated Press calls Weiner’s award the highlight of the ceremony.

• Entertainment Weekly reports that Jon Hamm will return to NBC’s Parks and Recreation during a season seven episode.

• Bustle recommends six ways for viewers to distract themselves before Season 7’s second half airs, including re-watching the series, which is “the perfect way to relive the magic of the show all over again.”

• Matthew Weiner explains that Mad Men is a show about “success”, “human behavior” and “regular people in a historic situation,”according to The Hollywood Reporter.

• According to Variety, Matthew Weiner says Mad Men‘s international popularity is “a vote of confidence for the idea that if you tell a story that’s very specific, if it’s true about humanity, then it will cross cultural and language barriers.”

• Vulture spotlights Vincent Kartheiser’s turn in the trailer for Red Knot, a movie that opens Dec. 5 and features Kartheiser “as a normal, modern-day dude with a healthy hairline.”

• Digital Spy has photos of Jon Hamm in the U.K.’s Black Mirror special, which will air in the U.S. on Christmas Day.