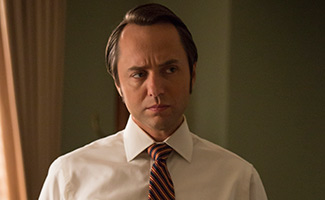 This week, Vincent Kartheiser and Elisabeth Moss talk about their characters’ endings to Vulture and Crave Online, respectively, while Matthew Weiner lauds Kiernan Shipka’s acting in the last seven episodes. Plus, Access Hollywood goes behind the scenes of Robert Morse’s farewell song and dance. Read on for more:

• Asked by Vulture about Pete’s ending, Vincent Kartheiser says, “I think people will know that no matter how the show ends…it’s just a passing moment. There is no ending.”

• Talking to Crave Online about Mad Men‘s imminent finish, Elisabeth Moss says, “I couldn’t imagine a better ending for Peggy’s story so I’m really happy with where it ended for her.”

• Elisabeth Moss tells Buzzfeed what she learned from playing Peggy, that “even though she gets knocked around a lot and criticized and made fun of and money thrown in her face and all kinds of indignities, she keeps going and she believes in herself…”

• Indiewire learns from Elisabeth Moss that she would be open to a Mad Men spinoff “but only if it’s written by Matt Weiner. That would be my one condition. Although, I do think we should get Joan in there.”

• At Mad Men‘s induction into the Broadcasting & Cable Hall of Fame, Matthew Weiner, talking about Kiernan Shipka, tells Vulture, “I think you’ll see that she has the best work she’s done in the last seven episodes.”

• Access Hollywood has a behind-the-scenes look from the Season 7 Blu-ray at Bert’s farewell performance and warns, “Try not to tear up watching footage of the Mad Men cast, including Christina Hendricks and January Jones, watch Robert [Morse] film his final scene.”

• Vulture pitches several Mad Men spinoffs because “the idea that the show will be over-over — totally over, done forever — is becoming more distressing.”

• Flavorwire has a report of Matthew Weiner’s attendance at the “Women at Work” panel for the Festival Albertine, in which Weiner mentioned that the first line of Mad Men he ever wrote was Don saying, “I’m not gonna let a woman talk to me like that” (in the series premiere).

• Stephanie Drake talks to CSNbaltimore.com about her Baltimore Orioles fandom and asserts that Meredith “roots for the Mets like her boss, Don Draper.”

• The Hollywood Reporter says that the U.S. rights to Good Kill, a drama starring January Jones and Ethan Hawke, have been picked up by IFC Films.