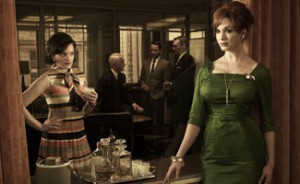 This week, Christina Hendricks talks to People about the prospect of Mad Men ending, while Elisabeth Moss discusses fashion with The Hollywood Reporter. Plus, the new Season 7 photos generate lots of buzz. Read on for more:

• Christina Hendricks tells People that Mad Men‘s upcoming end is “scary. But we had a really good run.”

• Elisabeth Moss talks to The Hollywood Reporter about her red carpet looks, including her “defining style moment.”

• TVLine checks out the Season 7 cast portraits, saying, “What you’ve got here are some hip cats and groovy foxes.”

• Screen Daily reports that Jon Hamm will receive the CinemaCon Award of Excellence in Acting at next week’s CinemaCon.

• PolicyMic spotlights the eight actors who have appeared on both Mad Men and ABC’s Scandal.