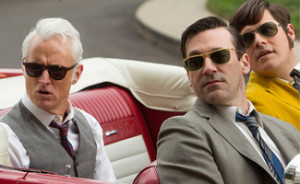 • Jon Hamm played dominoes to benefit a nonprofit called Artists for Peace and Justice, according to Variety. Hamm shares with Glamour that Jay R. Ferguson taught him to play the game, which is “an easy game to pick up, but hard to get good at.”

• Deadline reports that Rich Sommer has joined the cast of a CBS pilot called Good Session.

• Jessica Paré talks to Stylist about the evolution of Megan’s wardrobe into “a lot of heavy prints and beautiful combinations.”

• The Huffington Post reports that Season 6 will be available for streaming on Netflix on Mar. 30.

• CarterMatt.com showcases AMC’s two-minute video catch-up on Peggy and notes, “Peggy’s easy to root for, and we really do hope she finds a way to keep things together” in Season 7.

• CBC News reports that Jessica Paré will present at the Canadian Screen Awards this weekend.