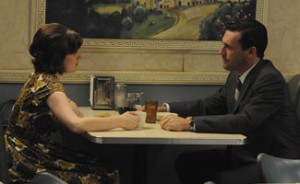 This week, The New York Times notes that President Obama has gleaned insights on his grandmother’s life from the portrayal of Peggy, while TV Guide thinks the Season 6 finale was one of 2013’s most outstanding episodes. Plus, the Los Angeles Times is a fan of one of Pete’s most famous lines, “Not great, Bob!” Read on for more:

• President Obama tells friends that watching Peggy in Mad Men has “given him insight into what it must have been like for his strong-willed grandmother in a world dominated by men,” The New York Times reports in an article about the president’s favorite TV shows.

• “In Care Of” — the Season 6 finale that “raises the idea that a broken Don Draper has finally learned his lesson” — is one of TV Guide’s top episodes of the year.

• Check out Jon Hamm — who’s been “criminally absent from the big screen since Jennifer Westfeldt’s 2011 comedy-drama, Friends With Kids” — in the poster for Million Dollar Arm, courtesy of HeyUGuys.

• The Vancouver Sun recommends binge-watching Mad Men, a “future classic you won’t be able to watch one episode at a time.”

• Hollywood.com features the Season 6 premiere, “The Doorway,” on its list of the best TV and movie New Year’s Eve scenes.

• SportsGrid does a podcast about its favorite TV episode of the year, “The Crash.”

• The Huffington Post rates Pete falling down the stairs and Ken tap dancing as two of TV’s best 2013 moments, in GIF form.

• The Wire makes a New Year’s resolution for Peggy: “I will find someone who appreciates me and my work, but isn’t completely inappropriate for me.”

• According to Racked, Janie Bryant is partnering with Mack Weldon on a men’s sock line.