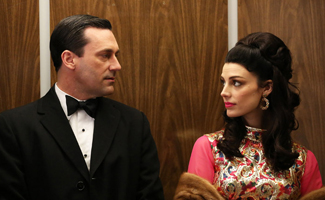 The Costume Designers Guild announced their nominees for the 16th annual CDG Awards and Mad Men‘s Janie Bryant has been honored with a nomination in the Outstanding Period/Fantasy Television Series category for her work on Season 6.

Bryant is up against the costume designers of HBO’s Boardwalk Empire and Game of Thrones, PBS’ Downton Abbey and Showtime’s The Borgias.

Winners will be announced Sat., Feb. 22, during a ceremony at the Beverly Hilton.

Click here to read an interview with Janie Bryant.