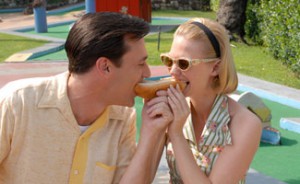 This week, The Guardian chats with Jon Hamm about Mad Men’s imminent end, while USA Today calls January Jones one of Love Actually’s breakout stars. Plus, Kiernan Shipka is featured in the trailer for a new Flowers in the Attic adaptation. Read on for more:

• The Guardian conducts an in-depth interview with Jon Hamm, who talks about Mad Men’s end: “I am feeling pretty zen about it just now, but probably next year I will be crying my eyes out.”

• Kiernan Shipka is featured in the trailer for Flowers in the Attic (at Entertainment Weekly‘s website).

• Jon Hamm talks to The Sydney Morning Herald about why a Mad Men movie would likely not work.

• The Hollywood Reporter conducts a video interview with January Jones, her hairstylist and her makeup artist about the look they put together for her for last year’s Met Ball.