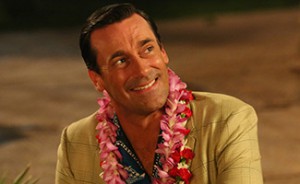 This week, ShortList talks Mad Men with Jon Hamm, while Ellen DeGeneres imagines what Mad Men would be like without cigarettes. Plus, Kiernan Shipka discusses playing a Disney mermaid. Read on for more:

• Jon Hamm tells ShortList that Mad Men’s vaunted secrecy when it comes to scripts and plotlines makes the show “very retroactive” because “we live in a culture right now where everything is available, always.”

• In honor of the Great American Smokeout, Ellen takes a look at what Mad Men would be like without the smoking.

• Kiernan Shipka talks to Zap2it about voicing a mermaid in the Disney Channel’s Sofia the First: The Floating Palace.

• A.V. Club continues its reviews of Mad Men’s Season 1 episodes, awarding an A- to “Marriage of Figaro.”

• Ad Age features a commercial for Sports Illustrated from the late ’80’s that stars John Slattery.