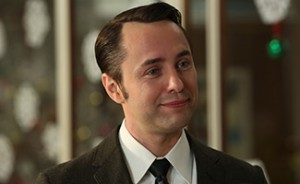 This week, The Hollywood Reporter honors Matthew Weiner as one of TV’s top showrunners, while Vincent Kartheiser’s home is spotlighted by The Huffington Post. Plus, Kiernan Shipka is cited by the NY Daily News as a young actress with a “nuanced” role. Read on for more:

• In naming Matthew Weiner one of TV’s top showrunners, The Hollywood Reporter notes that “it was Weiner’s Mad Men that put AMC on the map in 2007.” Weiner also tells THR he can’t believe he got away with “Bob Benson’s shorts.”

• Den of Geek posts a trailer for Sweetwater, which features January Jones.