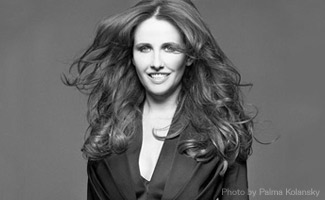 Q: How do you dress an entire army of secretaries for every single episode?

A: It’s a huge challenge; it really is. How it works is that I have a woman’s costumer that helps me with the female background players. We build a “closet” for all the background secretaries. Each one gets four to five costumes for each season — and by season, I mean winter, spring, summer, fall. And those costumes rotate for each scene. My woman’s background costumer has to make sure that the costumes the secretaries are wearing aren’t conflicting with my principal cast. She has to come to me and say, “What’s Joan wearing today? Who do we have in the office today?” She has to make sure that the background costumes don’t conflict or match or rival with the principal cast’s costumes.

A: Also, it’s very important that each of the secretaries have their own characters. We have a sexy one, a school marm, a very fashionable one. We create personas for each of these background players through their costumes, and we keep “who they are” very consistent.

Q: Fans comment on the site wondering if specific colors have meanings. For example, if a character wears black, he’s about to die or destroy a relationship.

A: What do you think?

Q: I think there’s been a lot of blue and green, and whenever characters wear it, they seem to be breaking rules…

A: I mean, maybe subconsciously it happens, but the thing is, we’re in that very mod period of the late ’60s. So green and blue is everywhere, especially in more preppy designs. Those colors were very popular in the ’60s — just like red and white, green and blue, yellow and black — those really strong contrasting colors were working together in bold graphic design. That was the color palette of the time period.

A: Exactly. And specifically for Peggy, navy blue has always been a very important color for her character. It’s a “serious” color, and it also plays into the idea that Peggy is trying to be one of the boys and incorporating herself into that office. She’s amazing at her job, but it’s always about that balance of creating that feminine and masculine world in her costume design. Two of her important suits were navy and green.

Q: So when bloggers suggest that blue and green symbolizes adultery..?

A: First of all, it’s pretty safe to assume that this past season, almost every character is somehow involved in adultery.

A: I guess for me, using blue and green continuously was really about referencing the period, and for Peggy specifically, it’s a big part of her character’s color story. I didn’t use it to signify adultery.

VIDEO: Janie Bryant on Costumes in ‘The Better Half’

Q: And speaking of Internet rumors…

Q: Sharon Tate. Please can you tell us why Megan and Sharon Tate wore the same T-shirt?

A: It goes way back, actually. In Season 4, when Don proposed to Megan, Matthew had wanted Megan in a T-shirt. I said, “No, please don’t make her be in a T-shirt, please. She shouldn’t be in a T-shirt.” I was so resistant because I felt like that’s something that happens later. Women start wearing T-shirts more often in the late ’60s. Of course, knitwear has always been around, but the T-shirt culture that we have now is very specific. My conversation with Matthew was, “Putting Megan in a T-shirt is too modern. We can do it, but we can’t do it yet, please.”

Q: So you’ve been discussing Megan’s T-shirt since Season 4?

A: Yes. And this season, Matthew came to me and he said, “I really want her to wear a T-shirt, and I want it to be something political.” And I said, “That’s great. I love that idea.” When he said political, I was thinking, “This is going to be so fun.”

Q: So how did you go from “get Megan a political T-shirt” to “get Megan the T-shirt Sharon Tate wore in Esquire“?

A: When I started researching political tees, I realized most of them were homemade during this period. These kids were drawing and painting peace signs and “Make Love Not War” and I was finding a lot of references to these self-made T-shirts. The heat-pressed and screen-printed shirts were not as popular. So I was researching and researching. I had everyone in the Western Costume Research Library on it, and my team was on it, too. I really wanted an accurate T-shirt, and it didn’t seem true to Megan that she would paint her own.

A: Exactly. I truly think that Megan is not in support of the Vietnam War, but I didn’t necessarily see her making her own T-shirts. Can you imagine if Don comes home and finds her with, like, glue and a paintbrush? So I found that photo of Sharon Tate wearing the Vietnam star in Esquire magazine. And I knew in my gut that this was it. I showed the photograph to Matthew, and he loved it.

Q: So any parallels between Megan and Sharon Tate that exist on the Internet…

A: That shirt was really about the Vietnam star and the accuracy of “the sign of the times,” and what Megan Draper could have actually bought and worn. We’ve done a lot of striking costumes on Mad Men, you know, and never in a million years would I think this would be the one to get everybody so excited.