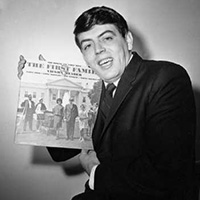 The 1960s were replete with one-hit wonders, but few performers experienced as meteoric a rise and fall as John F. Kennedy impersonator Vaughn Meader. In November 1962, The First Family, his lightly satiric album about the Kennedys, set a Guinness World Record by selling more than a million copies within two weeks of its release. A concert tour, a reported $22,500-per-week run at the Sahara Hotel in Las Vegas, and appearances on The Ed Sullivan Show and other high-profile television programs quickly followed. When JFK was assassinated the following year, Meader’s album and its sequel were withdrawn from sale out of respect, and his nightclub bookings were canceled or postponed. Meader recounted that he knew his career was in trouble when, after the assassination, fans reacted to him with pity — which he acknowledged, “is death for a comedian.”

Meader grew up in Boston, graduating from Brookline High School, not far from JFK’s birthplace. In his mid-20s, he developed a nightclub routine that included a mock presidential press conference with him as Kennedy ad-libbing witty responses to audience questions. The routine led to his role portraying the president on The First Family. The album’s producers surrounded Meader with a strong cast, including Naomi Brossart as Jackie Kennedy. (In one of the album’s best cuts, Brossart, sounding like a cross between Marilyn Monroe and Jacqueline Kennedy, breathlessly spoofs the famous White House tour that the real-life First Lady conducted for CBS television.) Meader was so convincing as JFK that some radio listeners accused the president himself of uttering the album’s outlandish one-liners about national and world politics.

Comedian Lenny Bruce purportedly broke the ice in his first performance after the assassination by blurting something along the lines of, “Boy, is Vaughn Meader screwed,” and quipping that an extra grave had been dug at Arlington National Cemetery for Meader. Bruce’s analysis of his fellow comedian’s future wasn’t far off the mark. By Meader’s own admission, he’d achieved fame by assuming someone else’s identity. When that was no longer an option and he wanted to be accepted as a comedian in his own right, neither he nor his audience could make the shift. Meader performed off and on until his death in 2004, but he never again approached the success he enjoyed portraying JFK.