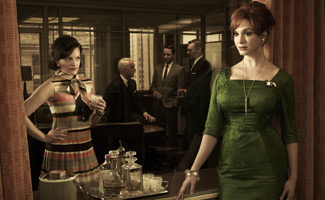 This week, Christina Hendricks chats with Lucky magazine about her own style as well as Joan’s, while Elisabeth Moss reads a tweet about herself on Jimmy Kimmel Live. Plus, Linda Cardellini talks with The Hollywood Reporter about Sylvia and Don’s affair. Read on for more Mad Men news:

• Christina Hendricks, gracing the cover of Lucky, shares her style secrets and says, “I would play Joan forever.”

• The Hollywood Reporter has video of Elisabeth Moss in the latest edition of Jimmy Kimmel Live‘s “Mean Tweets.”

• New York‘s primer on how to write a TV drama cites Mad Men for many examples, such as, “Start with an anti-hero. Give him a secret.”

• The Hollywood Reporter interviews Linda Cardellini, who reflects on Sylvia’s affair: “She’s a cheater like Don, but she handles it differently.”

• Kevin Rahm speaks with Entertainment Tonight about the merger putting Peggy back in Don’s orbit. Rahm also talks to Paste about the secrecy surrounding his elevation to a series regular in Season 6.

• In its “How To Design a Set” feature, New York talks to Claudette Didul about the details of Don and Megan’s 1968 Upper East Side apartment.

• Toronto’s 680 News reports that Jessica Paré has been named to Hello! Canada‘s list of the 50 most beautiful Canadians.

• The Los Angeles Times reports that A Young Doctor’s Notebook, a BBC series starring Jon Hamm and Daniel Radcliffe, will air on Ovation later this year.

• Deadline says that Warner Brothers has bought the U.S. rights to Ryan Gosling’s How To Catch a Monster, starring Christina Hendricks.

• The Times of India reports that Jon Hamm is in Mumbai filming Million Dollar Arm, in which he plays a sports agent looking for cricket players to play baseball in the U.S.

• The Film Stage has the trailer for The Congress, which features Jon Hamm’s voice and will premiere at this month’s Cannes Film Festival.