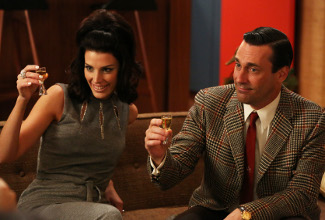 This week, Jon Hamm makes a cameo on Saturday Night Live, while Time discusses why the last episode of Mad Men was so exhilarating. Plus, The New York Times takes a look at the reality of ad agencies going public. Read on for more Mad Men news:

• Jon Hamm makes a surprise cameo on Saturday Night Live in a skit with guest host Zach Galifianakis, pulling off what The Hollywood Reporter calls “one of this season’s wackiest creative fetes.” Zap2it describes the skit as “wickedly brilliant.”

• Time explains why they think “For Immediate Release” was “the best Mad Men episode so far this season.”

• Variety speaks with Kevin Rahm, who talks about his reaction to “For Immediate Release”: “When I read it, I literally did a little dance.” Talking to Rolling Stone, Rahm compares Don and Ted to Larry Bird and Magic Johnson: “Two men at the top of their class who played better when they played each other.”

• The Guardian traces Peggy’s evolution, with Season 6 showing her “at her most confident, both at work and in her outfit choices.”

• Christina Hendricks, interviewed by The Sun, talks about playing Joan: “I don’t know whether I will ever get to play another character as interesting as the one I’m playing now or be able to have such great lines and scenes to do.”

• The Baltimore Sun interviews Baltimore native Stephanie Drake, who says the clashes between her character, Meredith, and Joan make “for some really good comedic relief.”

• The Seattle Times takes note of the Season 6 fashions — which are “truly swinging” — so far, while Janie Bryant talks to Women’s Wear Daily about the evolving looks of the show’s female characters.

• Tom Smuts, talking to the Pittsburgh Post-Gazette, says that joining the Mad Men writers’ room for Season 6 “felt like magic.”

• Vibe considers Mad Men one of the smartest shows of the last 20 years because “social turmoil becomes an invisible character via sly humor.”

• Theater Mania has a photo of Rich Sommer and the rest of the cast of The Unavoidable Disappearance of Tom Durnin, which will open June 28 in New York City.

• Filmoria has a trailer for Sweet Vengeance (also known as Sweetwater), which stars the “gorgeous” January Jones.