Could designer Janie Bryant have chosen a better costume to open “The Better Half” than Peggy’s split-seam jacket? It neatly divides her into two pieces, which is great because she’s torn professionally (Don vs. Ted), socially (work life vs. home life), and emotionally (boss vs. boyfriend). With this costume, Peggy isn’t wearing her heart on her sleeve — she’s wearing it across her entire chest. If I had to place a bet, I’d say she’s sticking to Team Chaough: After all, he’s wearing a yellow shirt that coordinates with her mustard-hued dress. Don’s still in black, white, and gray.

The “split in two” theme continues with Megan’s new blonde wig, and her soap opera role as twins who are “two halves of the same person. They want the same thing, but they’re trying to get it in different ways.” Which sounds a lot like Megan and Peggy… or Joan and Peggy… or even Don and Betty, who clearly “out” themselves as twisted soul mates during their tryst. Since each bares a piece of themselves to the other, it’s fitting they’re both literally bare. And one more brilliant match-up in this episode: Roger Sterling and his grandson are dressed in big-and-little versions of the same suit. When Margaret fumes about letting “a four year old watch another four year old,” she has the visual to prove it.

Later, Peggy’s split again. The top of her dress is a boisterous red polka dot. The bottom is a neat-and-clean navy pencil skirt. And while last week, she matched Ted’s zany wallpaper perfectly, this time around she clashes with it. Badly. Peggy’s color palette no longer matches Ted’s either. She wears dots and he wears stripes; she wears red and he wears blue and green. This season, that blue/green color combo seems to symbolize a sexual tie between two characters, so it’s only fitting that Ted wears it while berating Peggy for smiling at him. Another fun thing about that scene is when Ted sighs, “What an old tune. A boss in love with his protege.” 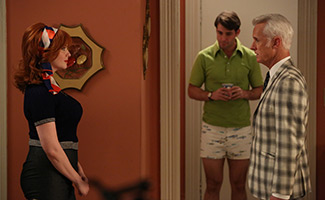 Fast forward to the scene where Arlene (Megan’s boss and co-star) meets the same fate. Like Peggy, Megan wears a bright, patterned top with a solid colored bottom. And like Ted, Arlene is in blue and green… (Joan and Bob Benson are also in blue and green when Roger interrupts their beach prep, and again the next day at the office. Both times, Roger wears gray and white…)

Then Peggy stabs Abe, and the next morning she’s turned green — both literally and figuratively. After the night’s events, she looks physically unwell. Of course, if I had to stare at Ted’s “magic eye” wallpaper for half the day, then deal with Don’s passive aggressive “No, choose me!” attitude for the other half, I’d probably feel like hell (or rather, like Inferno) too.

And here’s one for the color theorists out there: Was it jarring to see Betty in the “rejected” hue of margarine yellow while bragging, “Look at me. Can you believe I’ve had three children?” I’d say it was more satisfying than anything: Betty the Bombshell is back!