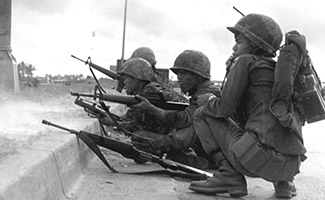 On Jan. 31, 1968, Viet Cong fighters attacked South Vietnam’s capital Saigon as well as over 100 of the country’s cities, hamlets, and military
installations. The offensive violated a ceasefire previously announced by the Viet Cong’s North Vietnamese allies to celebrate Têt Nguyen Dan, the Lunar New Year. This unprovoked attack came as a surprise to both U.S. military and the South Vietnamese regime. (By some estimates, half the troops were on leave.) For several hours, Viet Cong raiders occupied parts of the U.S. Embassy in Saigon. Televised images of battles in the capital and nearby cities contradicted optimistic assessments made by U.S. military leaders about the progress of the Vietnam War.

Historical accounts of the Tet Offensive differ regarding what intelligence reports were available to U.S. officials prior to the attacks, and even how many Viet Cong fighters participated. (Estimates range from 70,000 to 90,000.) North Vietnam’s goal to expand a formerly rural war is less disputed. The hope was to instigate a popular uprising in South Vietnam by proving the “puppet” government could not defend its people. The North also wanted to test the American-led forces. According to post-war analysis in a CIA-commissioned report and a North Vietnamese general’s memoirs alike, the North failed to incite dissent. Instead, Viet Cong support decreased significantly. Moreover, the Viet Cong and North Vietnamese Army sustained heavy losses so that within months, many military gains were erased.

Despite these setbacks, many historians cite the Tet Offensive as a turning point for the North because the attack persuaded some U.S. strategists and many citizens that the war was not winnable. Walter Cronkite, the CBS Evening News anchorman, visited Vietnam in February 1968, then declared, “we are mired in stalemate.” A month later, President Lyndon B. Johnson, his popularity plummeting as the death toll among U.S. troops in Vietnam rose, announced that he would not run for reelection. 1968 was the war’s bloodiest year.