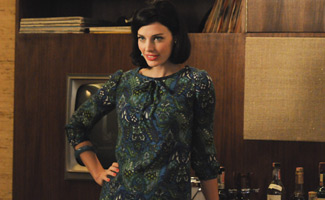 This week, The New York Times explains why Lane Pryce’s demise was difficult for both fans and series creator Matthew Weiner, while Jessica Paré lands on the cover of Elle Canada‘s March edition. Plus, The Hollywood Reporter talks about costume designers like Janie Bryant coming into their own. Read on for more Mad Men news:

• The New York Times calls Lane’s death on Mad Men “traumatic,” and quotes Matthew Weiner on losing “one of the best actors I have ever worked with” in Jared Harris.

• Jessica Paré graces the cover of Elle Canada and speaks to the magazine about auditioning for her role on Mad Men.

• The Hollywood Reporter cites Mad Men‘s Janie Bryant as a prime example of costume designers who are emerging from behind the camera to become brand ambassadors.

• According to Deadline, Peyton List will play the lead in The Tomorrow People, a CW drama pilot.