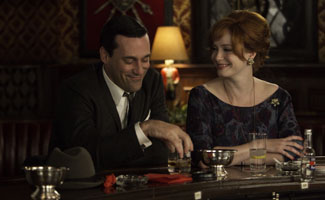 This week, The Hollywood Reporter considers Mad Men part of a “surge of brilliant dramas,” while New York Magazine plans out a schedule to catch up on the series ahead of the Season 6 premiere. Read on for more Mad Men news:

• The Hollywood Reporter cites Mad Men (and The Walking Dead) as an example of the “surge of brilliant dramas on television.”

• New York Magazine provides a schedule to catch up on Mad Men before the Season 6 premiere on Apr. 7.

• Talent Zoo interviews Janie Bryant, who explains why she believes Mad Men‘s costume design to be one of the show’s characters.

• According to The Hollywood Reporter, the rights to Sweetwater, starring January Jones, have been sold for several international markets.

• Meanwhile, The Hollywood Reporter says British rights to The Quiet Ones, starring Jared Harris, have gone to Lionsgate U.K.