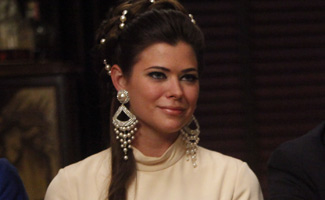 In this interview, Peyton List, who plays Jane Sterling on AMC’s Mad Men, describes acting as if on she were on a psychedelic and her new-found obsession with girdles.

Q: Your clothing was very glamorous this season, particularly the “Goddess Pantsuit” you wore to the LSD party. Do you have a favorite Jane costume?

A: I don’t have a favorite outfit because I feel like Janie Bryant outdoes herself every episode. When I saw the “Goddess Pantsuit” it was in a fitting, and I knew we were getting out of one period of history into another. I was just kind of floored. I said, “Let me put that on, please!”

Q: What was your reaction when you first read the script with the LSD scene?

A: It was so different than any other episode of Mad Men. It was almost like its own little stand-alone movie. Going into it, I didn’t know how we were going to shoot it with Roger’s hallucinations, but it turned out so amazing.

Q: What’s the trick to acting like you’re on a psychedelic drug?

A: You just kind of have to guess. They have on paper what you’re experiencing, so you’re just giving yourself over to actually experiencing it and believing that you’re seeing things that aren’t there. We had a really good time with it. And lots and lots of laughs for sure.

Q: Jane and Roger had their troubles in Season 5. How do you get in the right mindset to play a couple in their position?

A: The LSD trip is a trip of their relationship, as well as being a trip on drugs. It was like riding a wave. And that’s how it felt as we were shooting it. I also remember shooting that scene where we’re deciding to split and feeling like it was one of those scenes that could have taken place at any time, including 2013. That sort of conversation happens to many people across the years. We also shot a lot of that in order, so we shot it towards the end, which made it a lot easier to place myself there.

VIDEO: Inside Episode 506, “Far Away Places”

Q: Do you have a favorite Roger one-liner?

A: There’s too many every single episode! We enjoyed the one in the first episode of this past season at Don’s birthday party. Roger says, “Why don’t you sing like that for me?” I remember thinking in that moment, “This is one of his one-liners, so I have to do a good one-liner!”

Q: Right, you say, “Why don’t you look like him?” So you kind of beat Roger at his game!

A: Ha, well it certainly sets the tone for their relationship at that moment.

Q: John Slattery seems so charming and funny. Is it hard pretending to be mad at him?

A: You will be charmed by him no matter what you do. There’s no defense. But I think over the years, we’ve developed a rapport and we know what kind of dynamic Jane and Roger have. Jane gets so snippy with him. It’s just funny! But I adore John. He makes everything just so much easier.

Q: You were in a thriller called Meeting Evil, in which Luke Wilson cheats on his wife with your character. Jane was originally “the other woman” as well. Coincidence?

A: They always seem to cast me that way, don’t they? [Laughs] I think it’s probably easier for people to see me that way after Mad Men because I enjoy doing Jane so much that people probably think that’s how I really am.

Q: You’ve said that ’60s clothes make you feel womanly and sexy. Do you ever think, “What would Janie Bryant do?” when choosing your own outfits?

A: I’m going to tell you something… I discovered Spanx and I am obsessed with them because they literally feel like a girdle. And I fell in love with that sort of posture it gives you, and the confidence it gives you, and the femininity. I think we’ve entered a time on the show where [pantyhose] have been invented because I was given those in wardrobe, and I asked for my girdle back. [Laughs]

Q: So you actually enjoy wearing the girdle?

A: [Laughs] I know, it’s terrible. It’s hard to wrap your mind around it if you live in our day and age because people wear sweats to the grocery store. We’re just used to dressing in whatever makes you comfortable.