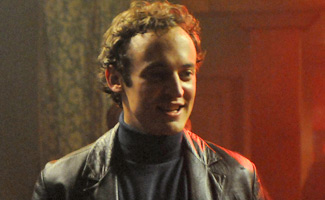 In this interview for AMCtv.com, Charlie Hofheimer, who plays Abe Drexler on AMC’s Mad Men, discusses daydreaming about Abe and Peggy’s future and getting recognized by Gary Oldman.

Q: When Abe was first introduced as a love interest for Peggy, what did you know about where their story was going?

A: Nothing! In the audition for the part, the character names had all been changed to deliberately obscure what scene this was, where it took place, and who was involved… So I knew very little.

Q: When did you start to realize you were going to be around for longer?

A: When I read the script for when Abe [proposes the] move-in with Peggy, maybe that was the first moment when I started to daydream about what might be or what could be between Peggy and Abe. I think I probably giggled like a girl and maybe ran around in place.

Q: Did you research the ’60s counterculture in preparation for your role?

A: Quite a bit. And it just so happens that my best friend in the world from pre-school, his father is Wayne Barrett, who was the head political writer for The Village Voice for thirty years…so I grew up with a surrogate father who was a bull-nosed investigative journalist — somebody like Abe. I think I’ve had a good model.

Q: If you lived in the ’60s, which Mad Men character would you have been?

A: When I discovered I was going to be playing the mod, liberal hippie, I thought, “Oh, I’m not going to get to wear the cool suits.” But I’ve actually come to feel that it’s so cool to be from “the wrong side of the tracks” and also to be on the right side of history. You learn to find what you love about every character that you play, but I don’t know that I’ve ever loved a character as much as I’ve loved Abe.

Q: Was it hard to get the right tone in the scene between Abe and Peggy at Minetta Tavern?

A: I think Abe was…very aware of the societal expectations or opinions about what he’s asking and perhaps what her family would think. I think he falls for Peggy hard. So shooting that scene was about investing in getting her to realize that this is a way we can take our relationship to the next step, to the next level.

Q: Have you ever been in an awkward situation like the one with Peggy’s mom?

A: They say, with family, you never bring up sex, politics, or religion. There is a certain amount of smiling and nodding that’s gone on at get-togethers with the future in-laws. But I think I have a better shot than Abe did because he was damned before he even got in the room with Peggy’s mom. [Laughs]

Q: What would be your advice to Abe and Peggy on moving in together?

A: I’d give them the same advice that I’d give anyone else. I did the whole flaming romance, fall in love, get your heart broken, be crazy, act the fool, and when I came out the other side…there was no evidence that I had changed for the better. Being in love is not holding hands and staring deeply into one another’s eyes; being in love is holding hands and staring deeply into the future together.

Q: You’re co-starring with Gary Oldman in a thriller called Paranoia. What can you tell us about that?

A: It was a small part, but it was an important one to the story, and more importantly it was shooting a 16-hour day with Gary Oldman. What was amazing to me was when I first saw Gary in the room, I said, “Oh, Mr. Oldman, I cannot tell you how excited I am to have this opportunity…” And before I could finish my sentence, he cut me off and said, “I know who you are.” And then he said, “Name any line of any episode of any of the five seasons, and I’ll tell you who said it.” He’s obsessed with Mad Men. He loves it!