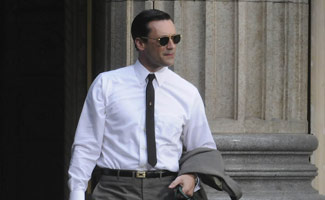 This week, Mad Men rounds out 2012 on even more lists of the year’s best TV, while Jon Hamm digs deep into Don’s mindset for an interview with the Calgary Herald. Plus, GQ names Ben Feldman one of eight breakout TV actors. Read on for more Mad Men news:

• Zap2it considers Season 5, Episode 11, “The Other Woman” to be the year’s best TV episode because it “digs so deeply into the series’ dual interests in office and gender politics.”

• The Calgary Herald interviews Jon Hamm, who shares his thoughts on monogamy and the “central irony” of Mad Men.

• The (Minneapolis) Star Tribune calls Jared Harris one of TV’s most intriguing people, citing a performance as Lane that “stirred things up, offering viewers a man slowly sinking into a spiral of shame.” The Huffington Post‘s OMG TV moments includes Lane’s death, while The Arizona Republic describes Lane’s demise as “a grisly moment on the show.”

• The San Francisco Chronicle observes that 2012’s best shows were all old favorites, including Mad Men at No. 5.

• The San Jose Mercury News names Mad Men one of 2012’s 10 top TV shows, citing the drama’s ability to “wow us with its style and smarts,” while The Plain Dealer, ranking Mad Men as one of 2012’s best, observes, “No series digs as deeply into the American psyche.”

• Mad Men, “particularly rich in social-sexual commentary this year,” is the Denver Post‘s top show of 2012. The San Antonio Express-News also considers Mad Men one of 2012’s best. The St. Louis Post-Dispatch names Mad Men one of the year’s most outstanding shows, because “no drama satisfies me more, week after week.”

• Mad Men is one of the Arkansas Democrat-Gazette‘s top five 2012 shows, as Jessica Paré’s rendition of “Zou Bisou Bisou” “was enough to melt the remote control.” (No link) The Chicago Sun-Times also calls Paré’s “titillating performance of the ’60s French pop song” one of the year’s top TV moments.

• The Calgary Herald describes Mad Men as “the most stylish show on television.”

• Adweek reports that Mad Men was the second most time-shifted TV show in 2012 (behind Breaking Bad).