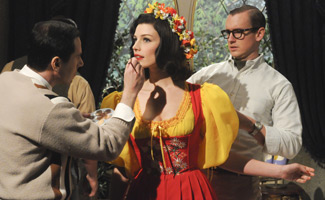 This week, Mad Men continues to dominate in the yearly best-of
retrospective lists, while Entertainment Weekly can’t get enough
of Jessica Paré’s breakthrough performance as Megan. Read on for more Mad Men news:

• Mad Men is The Hollywood Reporter‘s No. 2 show of the year: “It’s hard to depict 1965 without falling into rote imagery and concerns, and this series deftly avoided those pitfalls.”

• People also puts Mad Men at No. 2 because it “hit a stretch of greatness in Season 5.” [No link]

• Entertainment Weekly rates Mad Men one of the year’s top five shows, describing Season 5 as “unbuttoning in the 1960s, with characters taking trips both geographical and chemical.”

• Entertainment Weekly also praises Jessica Paré for her Season 5
performance; she “infused Megan with passion and compassion, purity and
purpose.” [No link]

• Mad Men lands No. 2 on Salon‘s Blue Glow Awards because “it remains the best thing on television: smarter, deeper, sadder, weirder than any of its competitors.”

• The Miami Herald names Mad Men one of the year’s best because the drama is a “fascinating panorama of the entropic decline of a tiny societal bubble.”

• Slate‘s top TV moments of the year includes Lane sitting in his new Jaguar in Episode 12, “Commissions and Fees.”

• Entertainment Tonight flashes back to Mad Men‘s and Jon Hamm’s wins at the 2008 Golden Globes.

• StyleList‘s best dressed list of 2012 includes Kiernan Shipka (see slides 41 and 42 in the slideshow), heralded for “her sweet dresses and pastel color palette.”

• New York Magazine highlights a Christmas card featuring Don and this greeting: “What you call Christmas was invented by guys like me to sell cards.”