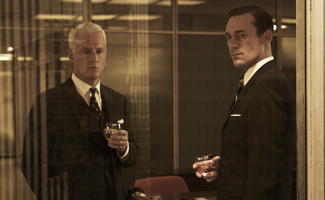 This week, news of John Slattery and Jon Hamm’s plans to direct episodes in Season 6 hits the press, while Rolling Stone credits Mad Men with the number one TV moment of the year. Plus, Mad Men is in the running for this year’s Satellite Awards. Read on for more:

• John Slattery tells The Hollywood Reporter he will direct two Season 6 episodes. Entertainment Weekly reports that Mad Men‘s Jon Hamm will also direct in Season 6. ScreenCrush is excited about Hamm and Slattery‘s episodes, proclaiming them to be “in good hands.”

• Rolling Stone ranks Roger Sterling’s acid trip as the number one TV moment of the year, saying, “Mad Men just keeps peaking creatively and is still far ahead of anything else out there on TV.” [No link]

• John Slattery chats with The Huffington Post about Mad Men and his new movie, In Our Nature, which hits theaters today.

• VH1 celebrates Jessica Paré‘s 30th birthday with a photo gallery of some of her hottest moments.

• Jon Hamm anticipates being “eviscerated for my horrible attempt” at an English accent in A Young Doctor’s Notebook, according to The Huffington Post.

• Daniel Radcliffe reveals a bathtub mishap from his Young Doctor scene with Jon Hamm, according to Hollywood.com.

• Collider.com suggests Jon Hamm is in contention for the lead role for a new comedy, Epic Fail, in which he’d play a high school teacher who hires two of his students to kidnap his wife.

• Mad Men has picked up a CableFAX award in the Best U.S. Show Across Borders category.

• Daily Mail has photos of Elisabeth Moss and Jon Hamm on a lunch date in New York City.

• Business Insider encourages fans to “be bold like Peggy” in its 5 Unexpected Workplace Lessons from Mad Men.

• Isthmus tells Mad Men fans how they can win tickets to the Mad Men Holiday Soiree at the Majestic Theatre on Dec. 15.

• Brisbane Times includes Mad Men on their list of Best TV shows of 2012.