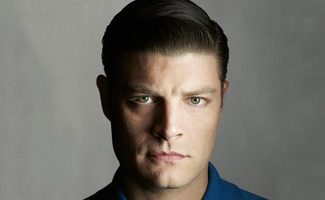 Jay R. Ferguson, (Stan Rizzo on AMC’s Mad Men) speaks to AMCtv.com in this interview, revealing his favorite thing about Stan’s costumes and which trait he shares with his character.

Q: Other Mad Men actors have said that Matthew Weiner has a gift for writing their personality into their character. What about Stan reflects you?

A: I think [Stan] likes to have a good laugh and I’m certainly a jolly fellow, most people that know me know that.

Q: Was there any moment where Matthew Weiner wrote something for you and you were surprised how spot-on he was?

A: That’s probably happened more times than I’d like to admit! [Laughs]

Q: Is your relationship with Elisabeth Moss anything like Stan’s with Peggy?

A: Any time that I have a scene with Ms. Moss is one of the more pleasurable experiences that I have on the show. We all joke quite often.

Q: What was the most shocking moment of Season 5 for you?

A: The last three episodes — there was something crazy shocking happening in every one of those. Really, throughout the season there was a bunch of stuff, but those last three episodes were just one thing after another. I think Lane’s death was probably the biggest shock of the season for everybody, and a close second would be Joan’s deal-closing efforts with the Jaguar gentleman.

Q: You’re no stranger to GQ‘s “Best Dressed on Mad Men” lists. What is your favorite thing about Stan’s costumes and why?

A: My favorite thing and my least favorite thing are one and the same, which is that it forces me to stay in good physical condition. That pressure of knowing that when I get dressed for work, there’s zero room for error there. It tends to make me get to the gym and do the stuff I have to do.

Q: Do you like the fact that Stan’s never worn a three-piece suit?

VIDEO: Inside Episode 512, “Commissions and Fees”

Q: You were kind of a teen idol. Do people recognize you more from Evening Shade or Mad Men?

A: I would say I get zero from the old days. I have been recognized from Mad Men, and it’s so cool when that happens because I am so proud to be a part of the show. I feel so blessed and lucky to even be associated or even mentioned in the same sentence with it. I’ve also been very proud of all the episodes that I’ve been a part of and the contributions that they have bestowed on me to make — whether it be a funny line or what have you. To be recognized for that is really special to me.

Q: You’re a self-proclaimed “space geek.” Neil Armstrong walked on the moon in 1969. Are you hoping that gets written into the show?

A: I would think that it would be worthy of some sort of blurb in one of the episodes. I would be shocked if it didn’t have some sort of mention at some point, but you never know!

Q: You’re also a huge scifi fan. Do you watch The Walking Dead?

A: I do! It’s one of my favorite shows. I’m very excited to see what happens when Rick and the Governor meet. I’m a big fan and went to the special premiere they had this year at Universal. All those cats are cool. Cool dudes and ladies are working on that show.