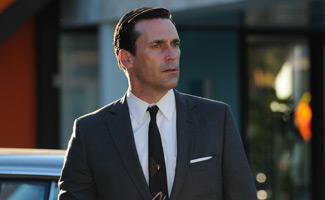 This week, Deadline Hollywood announces that Jon Hamm will serve as Master of Ceremonies at a comedy benefit, while Mad Men producers receive their fourth PGA nomination. Plus, check out Indiewire‘s exclusive clip of John Slattery’s new movie. Read on for more Mad Men news:

• Deadline Hollywood reports that Jon Hamm will join stars like Sarah Silverman and Will Ferrell as he hosts “We Hate Hurricanes,” a Dec. 10 comedy benefit to aid those affected by superstorm Sandy.

• The New York Times shares a photo of Elisabeth Moss wearing Louis Vuitton in their “Styled To a T” column.

• Indiewire has an exclusive clip of John Slattery and Gabrielle Union from their new movie, In Our Nature.

• ScreenCrush features Jon Hamm on their “Way Back When” list and takes a look back at his older film and television roles.

• Check out Just Jared‘s red carpet photos of Kiernan Shipka at the Life of Pi screening.

• The Examiner reveals new information about Christina Hendricks’ collaboration with Ryan Gosling, How to Catch a Monster.