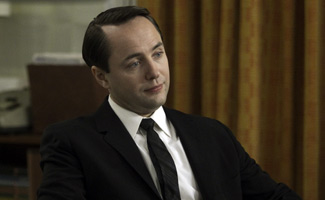 • Vincent Kartheiser then tells New York Magazine about the time he beat Hamm at dominoes three times in a row.

• NBC checks in with Jared Harris, who discusses what he’ll miss about Mad Men, including Turkish coffee at lunch. Harris also speaks with Entertainment Tonight about the price of Lane’s suicide.

• Mad Men makes New York Magazine‘s list of TV’s most devoted fan bases, along with Star Wars and Oprah. A badge for Mad Men “fandom” is available for download.

• According to The Hollywood Reporter, Jon Hamm and Adam Scott “transcended the boundaries of time, narrative and facial hair” in The Greatest Event in Television History. Entertainment Weekly pronounced it “amusing and extremely handsome.” Hamm and Scott explain the genesis of the event to New York.

• Matthew Weiner speaks with The Takeaway about using “the real-world events of the Cuban Missile Crisis to examine his characters’ lives” in the Season 2 finale.

• Christina Hendricks, interviewed by The Independent about a new film, raves about Janie Bryant.

• The Ottawa Sun asks Brian Scolaro about his role in Mad Men‘s Season 5 premiere, where he played the owner of the wallet that Lane found.

• Multichannel News reports that AMC has been inducted into the Cable & Telecommunications Association for Marketing Hall of Fame, due to the marketing of Mad Men.