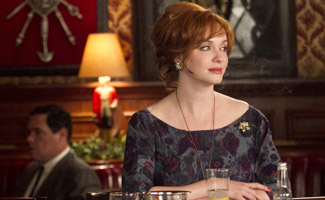 • According to The Hollywood Reporter, Matthew Weiner and Christina Hendricks will team up to present an award at the Creative Arts Emmys ceremony this weekend.

• W Magazine catches up with Elisabeth Moss, who talks hair, make-up and anticipation for Mad Men‘s next season.

• Kiernan Shipka talks fashion with People, explaining that fall and winter are her favorite seasons because of the trench coats and stockings.

• New York Magazine interviews Bryan Batt, Michael Gladis, Randee Heller and Maggie Siff about their time on Mad Men and what they’ve been doing since then.

• Wetpaint argues that Elisabeth Moss should win the outstanding drama lead actress Emmy this year. One reason? “Just give it to her already.”

• Mad Men tops The Sydney Morning Herald‘s list of the top 25 shows of the past 25 years.

• The San Jose Mercury News reviews Vincent Kartheiser’s performance in The Death of the Novel. Of the performance, Stark Insider says, “Watching Kartheiser work his craft and shape the character of Justice is worth the admission.”

• Christina Hendricks dishes to New York Magazine about Ryan Gosling casting her in his feature film directorial debut, How To Catch a Monster. See Hendricks in the trailer for the film Ginger and Rosa, courtesy of The Guardian.

• Ben Feldman talks to the Ithaca (N.Y.) Times about playing Michael Ginsberg, as well as his time at Ithaca College. TV Guide has a photo of Feldman in a scene of the season finale of Lifetime’s Drop Dead Diva.