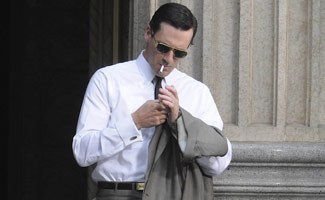 This week, Variety spotlights Matthew Weiner and Mad Men‘s influence on social trends, while Jon Hamm makes a cameo to promote The Campaign on The Daily Show. Read on for more Mad Men news:

• Check out Entertainment Weekly to watch a video of Jon Stewart calling in Jon Hamm for comedy reinforcement on The Daily Show.

• E! Online creates a photo gallery to examine each of Mad Men‘s 17 Emmy nominations. Meanwhile, viewers can cast their own votes for Mad Men at the Gold Derby TV Awards.

• Matthew Weiner confirms to TVLine that Elisabeth Moss will definitely appear in Season 6 of Mad Men.

• Jon Hamm jokes to New York Magazine about having an affair with The Campaign writer Chris Henchy and Hamm’s willingness to play Chris O’Dowd’s love interest.

• The Hollywood Reporter divulges the location where Matthew Weiner shot his film, You Are Here.

• Vincent Kartheiser tells the StarTribune that he’s not often recognized when he’s home in Minnesota. Mr Porter styles Kartheiser, who ruminates on Pete, noting, “He’s perpetually unsatisfied, and that’s a trait I share.”

• The Toronto Star talks to Jon Hamm for an article about TV stars who also direct episodes. (No Link)

• Scott Hornbacher — profiled by his hometown paper, the Detroit Lakes (Minn.) Tribune — is pleased by the series’ continued Emmy nominations: “It’s remarkable to have such large scale support this far in the series.”

• The Daily Blam showcases the cover art for Mad Men‘s Season 5 Blu-ray and DVD, which will be released on Oct. 16.

• According to Entertainment Weekly, Ben Feldman is returning to Lifetime’s Drop Dead Diva in the Season 4 finale.