Last season, we noted that Don Draper’s suits seemed to be getting smaller, until he was literally bursting through his seams in one scene where he suffered a panic attack. In this episode, costume designer Janie Bryant makes Lane’s suit seem even more constricting than usual, with the layers of shirt and tie and vest and jacket creeping up his chest like they were ready to choke him. It was also quite brilliant the way Pryce’s collar framed his neck during his death scene, as if his proper and traditional tie is what strangled him to death. Adding to the effect, Lane’s jacket when Don “catches” him has thin crossed lines. Against the bleak winter light, it looked like pen marks crossing him out of the frame; tying him into so many of Don’s discarded scribbles. (It’s not just the jacket, either. Lane’s scarf is white with black lines.) Peggy’s clothes may have made her blend into the SCDP chairs, but Lane’s jacket does something worse: It makes him look like a mistake that needs to be dealt with. This is not the “elegant exit” that Don Draper instructs Lane to make — but that’s the point, isn’t it? 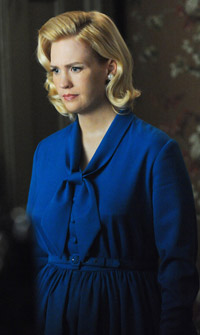 Now let’s take a deep sigh and move onto Betty Draper, whose ice blue color palette lends itself quite well to her Fair Isle ski wear. The sweater makes her look like a giant Swiss Miss model, both domestic and wholesomely escapist at the same time. That’s kind of what happens with her character this episode too, as Betty goes from the furiously strict (and ferociously jealous) mother we know into an actual mom who curls up on the bed with her daughter, tells her a straightforward but caring version of The Facts of Life, and brings her a heating pad. She does all this in an electric blue dress, but she also calls Megan to gloat about Sally “needing her mother right now,” so it does seem appropriate.

As for Sally, I had to laugh when I saw her dressed up for her big “date” wearing the go-go boots and eye makeup that Don expressly forbid her from wearing in a previous episode. If anything, they made Sally look younger than her age, especially when paired with the brown print dress that was so cute but so mismatched with her footwear! (Glen looked great in this episode too, especially in that blue collegiate coat with the orange lining that you can still buy at LL Bean today.) One last note on Sally: When she goes out with Megan, her blue turtleneck is the almost the same color as Betty’s dress, which certainly isn’t a coincidence.

Meanwhile, Megan-Watch returns with some stunning additions: Although in the beginning, she’s wearing the same green cable-knit sweater we’ve seen many times before, Megan quickly sheds her at-home skin for a series of swoon-worthy costumes, including a black mod dress she wears to an audition. Once back at home, she switches from that into a delicious red top with jeans that’s young, flirty, sexy, and hopefully to-be-repeated.

Finally, let’s consider the meeting scene, with Joan appearing as a full partner and Scarlett taking notes. The “new girl” is in a jade green dress, just like Joan’s last episode! This mimicry makes it pretty clear that Scarlett idolizes Joan and wants to be her. (Insert “Be careful what you wish for!” quip here.) As for Joan, she’s upping her business cred by wearing a tiny bow tie at her neck. Although I never thought I’d say this, in that respect it appears she’s taken a fashion cue from Peggy. Full circle, indeed…