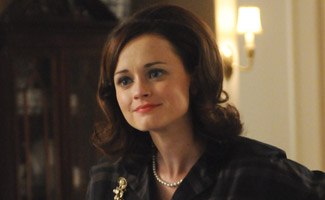 Alexis Bledel, who plays Beth Dawes on AMC’s Mad Men, speaks with AMCtv.com about her character’s sex scene with Pete Campbell and what excited her about this role.

Q: Who was your favorite character before joining the cast?

A: They’re all written so well… Peggy is an incredible character, and I remember thinking that when I first watched the show. She’s a great and rare television character. It’s been fun watching her go from Don’s secretary to coming into her own in that time period.

Q: What drew you to the part of Beth?

A: I instantly wanted to know more about her because she’s quite mysterious and she’s conflicted… I felt for her right away. She is stuck in a bad marriage that is really taking a toll on her psyche I think, so I just wanted to explore what that meant for her.

Q: This character is a bit darker than we’re used to seeing from you. Was it fun to play someone so different?

A: It was something I was excited to do, because we all have moments of intense sadness in our lives… [Beth] is not the type of person that’s afraid to explore her darker thoughts, and she actually really needs to talk about them with someone and she finds that opportunity with Pete.

VIDEO: Behind the Scenes of “Lady Lazarus”

Q: You look so different in period makeup. Did you recognize yourself?

A: It did feel like a transformation. It really helped to have those details like the nails. And the clothing down to the undergarments and the shoes are vintage, so it really does help you to transport you back in time.

Q: Did Janie Bryant give you any insight to her choices for Beth’s costumes?

A: She’s incredible. Beth is supposed to be still more of a fifties housewife. She still has the full skirts and…that more innocent kind of look, which contrasts with who Beth really is. And the outfit she’s wearing when Pete comes to the house with Howard, the colors are darker. She’s a little bit morose, so I think the color reflects that.

A: She’s more depressed than hysterical, but I think at that time people did see them more as one and the same. Men might have assumed that it’s a bigger problem than being upset or down. If it becomes emotional for a women, maybe it’s hysteria. [Laughs]

Q: Did you get to spend time with any cast members besides Vincent Kartheiser?

A: Yeah, a little bit. They’re an incredible group… Part of what’s really fun about working on the show is the time period — not only the clothes, but the sets and everything… The spirit of the time kind of translates into how it feels on set.

Q: Were you nervous filming the scene where you and Vincent hook up?

A: I was really nervous. [Laughs] Yeah… [Vincent] noticed, and made it much better for me by just sort of making sure I felt comfortable. He kind of helped me take the edge off a little bit just by being nice.

Q: A lot of the cast members say Vincent is really different than Pete…

A: Oh yeah. He’s light and funny and has lots of energy on set. He keeps everybody energized as well. Very, very different than Pete.