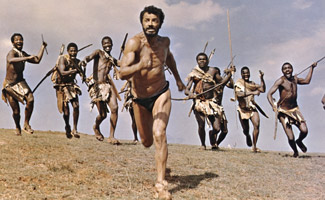 Hunter becomes hunted in Cornel Wilde‘s gripping chase film The Naked Prey (1966), an adventure tale set in the wilds of southern Africa. The plot is brutally simple: the leader of a safari group insults some local tribesmen, who torture and kill everyone in the party except Wilde, the safari’s guide. The tribesmen then strip Wilde of his clothes (save for a fetching loin cloth) and set him loose in the jungle, pursued for sport by a posse of warriors.

The Naked Prey trailer‘s voice-over details the rest of the story: “Helplessly trapped and hunted like an animal, his life becomes a desperate struggle against impossible odds.” Which is to say one “thrill-a-minute” chase scene after another, punctuated by Technicolor shots of the African bush country and gritty footage of animal-to-animal savagery and kills by the humans.

The Naked Prey is based on the legend of the trapper John Colter, a mountain-man guide for the explorers Lewis and Clark. Shortly after the duo’s famous expedition, Colter was captured by the Blackfeet Indians and survived a similar challenge. The Naked Prey transfers the story to 19th-century Africa in part because Wilde, also the film’s director and producer, received financial and other assistance from the South African government.

Wilde’s varied acting career included playing Chopin in A Song to Remember — for which he received his only Academy Award nomination, as Best Actor — and roles in film-noir classics such as Road House (1948) and The Big Combo (1955). In the mid-1950s, Wilde began producing and directing films that he also starred in. The Naked Prey is the most noteworthy of these, though the crime drama Storm Fear (1955), with a screenplay by a young Horton Foote, is beloved by noir aficionados.

Film essayists have been known to wax poetic about Wilde’s efforts in The Naked Prey — “in nearly every frame, you smell the sulfur of his conviction,” writes Michael Atkinson, for instance. Even today the movie is respected as one of the top survival-of-the-fittest exploits ever seen on the silver screen.