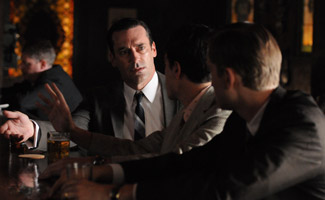 This week, Vanity Fair compares Jon Hamm to De Niro and Pacino, while The New York Times cites Vincent Kartheiser as a poster boy for Los Angeles. Read on for more:

• Vanity Fair‘s editor cites Jon Hamm as a TV actor who can present “complex portraits of manhood not seen since the golden days of De Niro and Pacino.” Kiernan Shipka is featured in an accompanying photo spread. [No link]

• A New York Times op-ed on Los Angeles’ urbanization notes that Vincent Kartheiser commutes on the subway to the Mad Men set.

• Jessica Paré speaks with The Globe and Mail about the Season 5 premiere. Billboard reports, Paré’s “Zou Bisou Bisou” debuted at No. 1 on World Digital Songs. [No link]

• Entertainment Weekly spotlights Mad Men‘s use of Dusty Springfield’s “You Don’t Have to Say You Love Me” in this season’s premiere.

• New York Magazine proposes reality shows to partner with other AMC dramas now that AMC has a drama (Mad Men) and a reality show (The Pitch) about advertising.

• The Associated Press examines fashions of the mid-’60s and how they might affect the look of Mad Men‘s characters.

• The Huffington Post is a fan of Joan’s storyline, commenting that she “may well go down in the cultural record book as a quintessential American female role model.”

• The Pittsburgh Post-Gazette‘s TV writer cites Mad Men as one of “the dramas I’m most eager to see each week.”

• The Fresno Bee speaks with Vincent Kartheiser, who claims he “can go just about anywhere without being recognized.”

• The Kansas City Star polls its audience about which actor wore a fat suit best. January Jones is one choice, along with Courtney Cox (Friends) and Mike Myers (Austin Powers).

• Flavorwire is keeping track of which Mad Men character has the best Season 5 lines.

• Gather reports that Larisa Oleynik, who plays Ken’s wife, “was someone you might recognize if you were a Nickelodeon fan” since she starred in The Secret World of Alex Mack.

• Business Insider cites Mad Men‘s influence for the resurgence in the use of the word “secretary.”