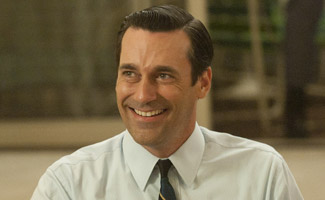 Jon Hamm (Don Draper on AMC’s Mad Men) speaks to AMCtv.com about the difference between Don Draper and Superman and his dream about directing his first episode of the show.

Q: You directed Episode 3, “Tea Leaves.” What was that like?

A: It was a thrill. Honestly, it was really fun… I think it was helpful for the rest of the cast to have a familiar face behind the lens.

Q: Has directing changed your perspective on the show?

A: Yeah. You see explicitly how much work from goes into making it, and you see other sides of the show that you were completely unaware of as an actor. And it just gives you a whole new respect for how many people are really pulling an oar and making the boat go.

Q: Do you think the audience will be able to see Jon Hamm’s touch in the episode?

VIDEO: Behind the scenes of Episode 3, “Tea Leaves”

Q: Is directing yourself strange?

A: It is, but obviously it’s not impossible… The main thing is that you’re very aware of wasting time as a director. And you don’t want to be that guy who’s wasting it on yourself.

Q: In the sense of demanding endless takes?

A: Yeah, like we’re going to do this four more times because I didn’t really get it. If anything, that’s really a hard thing to gauge because sometimes you really do need to do another [take].

Q: Matthew Weiner told us he dreams about the show. Do you?

A: I had an anxiety dream before directing. I woke up the day before we had to go back to set and was like, “Oh my God.”

Q: What was your fear exactly?

Q: What do you think of the show’s underlying message about right and wrong?

A: Listen: There ain’t none of us on the planet that are perfect. And I think that people recognize human frailties and foibles and f***-ups and identify with it, honestly. Superman is a cartoon character. He’s not a real person. And no one is without sin, without mistakes.

Q: TV has become a highly respected actor’s medium. How much do you think Mad Men has to do with that?

A: We certainly weren’t responsible for it, but we were part of it. When we started the show, none of us were famous… I think that it’s all about content and the work and what you get to do. There are a million different channels, and everyone is doing original programming now. But part of rising above the noise is having something different to say or a different approach.

Q: I also think that Don Draper would not have been such a huge persona if he were a movie character.

A: I think so too… I think part of why people were able to hang this Don Draper character on me and be comfortable with it because they didn’t really have a firm understanding of who Jon Hamm was. It was easier to swallow.

Q: So you’re not nervous about being 80 and people still calling you Don Draper?

A: No. I’ve been able to do some other stuff and have it be relatively successful. I’m more nervous about being 80.