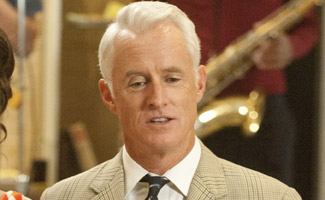 John Slattery (a.k.a. Roger Sterling on AMC’s Mad Men) speaks to AMCtv.com about still being surprised by the show’s characters and how Roger might fit into the disco era.

Q: Jon Hamm told us that directing made him more aware of himself as an actor. Has directing changed the way you act?

A: It took the pressure off of feeling like you had to really carry a section of the script… I think sometimes actors put pressure on themselves to get it from start to finish, and it has to be this brilliant performance. But no matter how brilliant it is, it’s rare that one take is used for a whole scene. The craft becomes more evident and other people’s contributions become more evident. So it takes a little of the onus off of you.

Q: What makes Roger so funny?

A: Matt [Weiner] said that Roger is somebody who enjoys the joke as much as he does the telling of it… He comes off as someone who’s genuinely having a good time saying what he’s saying. He can also sort of look around and tell if the moment is ripe for the picking. And no one else is going to say what everyone is thinking.

A: I like the one, “My uncle lost his leg… He used to ask me to scratch his toes, but he didn’t have any.” But there are so many in [Season 5], and they’re so funny!

Q: But Roger can also be such a cad…

A: You know, I like to argue that just when you think he’s a complete basket case as far as human relations go, that he sort of pulls it out and acts sincerely towards, say, Joan or offers good advice to someone. I think that’s what’s good about the show. Just when you think you know these people and you think you can put them in a box, they act in a way that surprises you.

VIDEO: Roger Is Back

Q: How do you think Roger has changed over the course of the show?

Q: How much did he care that he lost that account?

A: I think that’s the question going forward… He’s coming off the realization that he didn’t create the business that he’s been working in for 30 years. He thought he did, but he had it given to him. It’s a complicated situation because he’s being penalized for doing what he did so well. What is managing accounts? A lot of times it’s dinner and drinks and he’s good at it. He’s very social. And he makes people feel good.

Q: He’s been resting on his laurels…

A: Right, and now the world is changing. That’s what’s interesting about [Season 5] is that we’re getting further into the ’60s and we all know how that ends.