Five characters landed on their backs this episode: Peggy (asleep on the couch), Don and Megan (tackled on the carpet), and Roger and Jane (acid-tripping on the rug). And when the camera panned down on them, they looked — for a moment — like they were each a version of the falling man in the show’s opening credits. That visual trick owed much to their costumes — thanks to Peggy’s sideways pussy bow, Don’s over-the-shoulder tie, Megan’s flyaway bob, and Jane’s floaty chiffon nightgown, the characters looked as if they were in motion. In a way, they were, at least emotionally, and in this episode every overhead shot came with a kind of personal reckoning.

For Peggy, it was the foggy realization that she’s turning into Don. Obsessed with work and desperate for a feeling she can’t (or won’t) name, she talks back to clients, helps herself to alcohol and cigarettes like she’s Hemingway at breakfast, and has anonymous sex while fighting off the attentions of her actual lover. Peggy’s costume is also a nod to Don: Her white collared shirt, striped tie, and wristwatch all mimic her mentor’s clean office look, while her linen dress is almost exactly the same fabric as the couch where she collapses. Just like last season, Peggy is so focused on her work that she’s literally starting to dress like the office. I was also a big fan of her lemony blouse and skirt at the end, but I was also slightly alarmed: yellow is not a good color for women this season. Don’s murder hallucination happened with a woman in yellow; the madame at the brothel he turned down in the last episode was also wearing it. Let’s hope I’m overreaching and this doesn’t mean sudden doom for Ms. Olson. 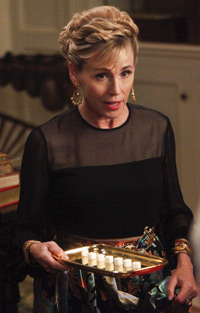 But as long as we’re on the subject of sudden doom, let’s review this episode’s main lesson: Never take LSD with a lover you despise. It’s funny and fascinating, but you’ll end up on the floor in matching Barbie-pink bathroom towels declaring, in various shades of consciousness, that you’re breaking up. It’s too bad, because this episode may have had Jane’s best costumes ever. Her white goddess jumpsuit with the pearl chandelier earrings made her look like a ’60s scifi priestess — not a bad reference considering her mind-bending activities. (If you liked the pearls in her hair, check out the Chanel Spring 2012 show on Style.com to see a modern version of the look.) The blue chiffon nightgown she sported later was also gorgeous, in a water-nymph kind of way, and to be honest it’s hard to feel sorry for anyone who looks that good in her pajamas! One more note on the LSD sequence: Jane’s doctor wore a maxi dress with such a kooky print, I would have thought I was hallucinating just by staring at it too long. It was a fun reference to her psychedelic practices, and also looked like something girls would wear today with ballet flats. (Contemporary designers influenced by boho fashion, like Anna Sui and Cynthia Rowley, always have good ones for spring and summer.) 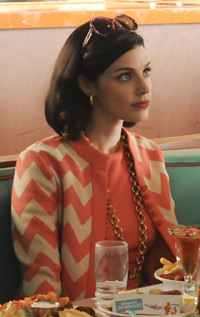 The other long, strange trip in this episode was with Don and Megan, although their journey was more literal. You could tell something would go wrong in the car when Don climbed in wearing his traditional all-gray shark suit, and Megan’s jagged orange and pink jacket was already clashing with itself — how could it not clash with her husband? Seeing her color-block cross hairs in front of Howard Johnson’s famous tangerine roof was a postmodern design dream — it looked like an Alex Katz painting — but despite her insistently happy colors, Megan was miserable and Don was frantic. Their transition from paramours into fully-formed and very different individuals was mirrored in Megan’s final costume: a somber dark brown and white dress to match her mood. The honeymoon is over and, at least for now, so are the technicolor miniskirts.

Both Ginsberg and Don were captured in glass this episode. For Ginsberg, it was at his desk, when he described his nebulous origins to Peggy. As he looked out at the city, the jangling checks and stripes on his costume reflected back from his office window. He was caught halfway between himself and the universe — a difficult place to be if you’re trying to get back to Mars. As for Don, he spends time trapped in the glass phone booth searching for any hint of Megan. And as he sits in the conference room at the episode’s end, watching the “kids” in their primary colors walk along like ducklings in the hall, he is surrounded but totally alone — and hunched on the conference table in his dark suit, he looks not like one of the executives, but like one of the office chairs.