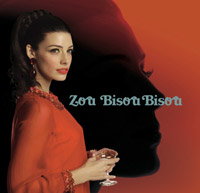 Lionsgate Television Music, the music arm of the studio’s TV division, is releasing Jessica Paré’s sultry rendition of the ’60’s French pop hit “Zou Bisou Bisou” (loosely translated as “Oh you, Kiss, Kiss”) from last night’s Season 5 premiere of Mad Men. The single was released digitally at midnight on iTunes, with special limited edition vinyl to be sold through the AMC Mad Men website: www.amc.com/shows/mad-men/merchandise. Shortly thereafter, there will be a wide retail release.

“Zou Bisou Bisou” was originally recorded in 1961 by British actress and pop star Gillian Hills, who was discovered by French film director Roger Vadim and starred in the British film Beat Girl before making a brief but steamy appearance in Michelangelo Antonioni’s 1966 classic film Blow-Up.

Lionsgate (NYSE: LGF) is a leading global entertainment company with a strong and diversified presence in motion picture production and distribution, television programming and syndication, home entertainment, family entertainment, digital distribution and new channel platforms. The Company has built a strong television presence in production of prime time cable and broadcast network series, distribution and syndication of programming through Debmar-Mercury and an array of channel assets. Lionsgate currently has 15 shows on more than 10 networks spanning its prime time production, distribution and syndication businesses, including such critically-acclaimed hits as the multiple Emmy Award-winning Mad Men, Weeds, Nurse Jackie and Boss, as well as the syndication successes Tyler Perry’s House Of Payne, its spinoff Meet The Browns, Tyler Perry’s For Better or Worse, The Wendy Williams Show, Are We There Yet? and the upcoming Anger Management.