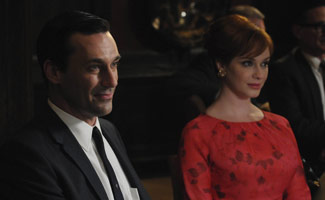 • Series Creator Matthew Weiner speaks to NBC Chicago about the 1960 movie The Apartment and its influence on Mad Men: “I always try and emulate that kind of storytelling, where the payoffs are visual and there’s a lot of misunderstanding, but they’re believable.”

• TV.com is rewatching each episode from Mad Men‘s first four seasons to get ready for the Season 5 premiere, and providing “review notes” for each.

• January Jones tells the Huffington Post that she can’t watch anything longer than 30 minutes because of her baby, while Rich Sommer says he wants to be the butler on Downton Abbey.

• The U.K.’s Shortlist names Mad Men one of the 50 coolest TV shows ever.

• John Leguizamo talks to the U.K.’s Telegraph about risk-taking in television: “Look at Mad Men and Breaking Bad. They’re incredible and everyone rushes home to see these shows.”

• Slate believes the Murray brothers (Joel among them) are “America’s greatest set of acting brothers,” even surpassing the Baldwins.