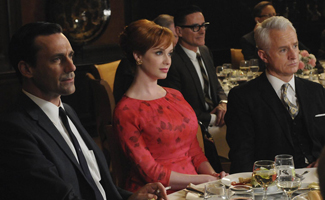 This week, Conan O’Brien gifts Jon Hamm to one of his employees and Christina Hendricks, John Slattery and Jared Harris all have film projects ahead. Read on for more Mad Men news.

• The Los Angeles Times spotlights a Conan sketch where one lucky staffer received Jon Hamm as her Secret Santa gift, courtesy of the boss.

• Return, a movie featuring John Slattery, will be screened at next month’s Palm Springs International Film Festival, according to The Hollywood Reporter.

• TV Guide [no link] is quite sure that audiences will tune in for Mad Men‘s Season 5.

• The Edmonton Journal also eagerly anticipates Mad Men “finally returning to TV. All is once again right with the world.”

• Daemon’s Movies shares some photos of Jon Hamm in Friends with Kids, which will be released in the spring.

• Westside Today reports that Joseph Culp, who plays Archie Whitman, will appear on stage next month in a dark comedy titled Awake in a World That Encourages Sleep.