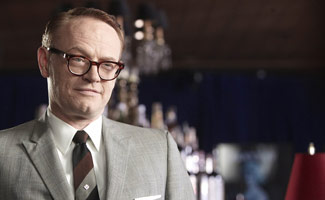 The Denver Post looks to Mad Men to brighten things this winter, while Jared Harris reveals his insights about the “brilliant, insightful” scene between Lane Pryce and his father. Read on for more Mad Men news.

• The Denver Post is eagerly anticipating the midseason schedule of TV shows like Mad Men, calling it a returning favorite.

• GossipCenter reports on Christina Hendricks’ holiday party, where the actress assures viewers that the wait for Season 5 will be worth it.