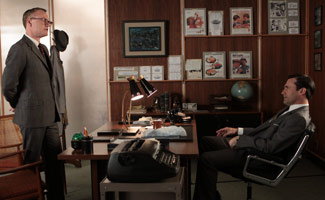 Mad Men is honored with a fourth consecutive PGA nomination and Jon Hamm is spotlighted in an Entertainment Weekly annual feature. Read on for more Mad Men news.

• Entertainment Weekly [no link] includes “the casts of AMC” in its 2011 Entertainers of the Year. Among the stars shown is Jon Hamm who shares his thoughts on Mad Men.

• Reuters reports that Mad Men garnered its fourth nomination from the Producers Guild of America.

• The house once occupied by both Sinatra and Monroe — and featured in Mad Men episode “The Jet Set” — is for sale. Asking price? $12 million, according to Curbed LA.

• Starpulse has a photo of Christina Hendricks at The Trevor Project’s 2011 Trevor Live! event.

• The Sydney Morning Herald names January Jones a fashion winner this year, calling her “a standout at this year’s Golden Globes in a custom-made Versace gown.”

• According to packaging website The Dieline, an advertising student has created a Mad Men Pale Ale, that features a link to the Mad Men Cocktail Culture iPhone app.