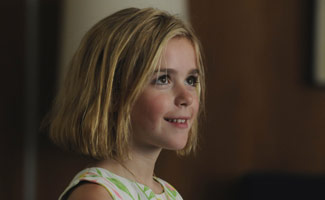 • Entertainment Weekly reports that Kiernan Shipka will guest-star on ABC’s Don’t Trust the B— in Apartment 23 as herself.

• In an interview about her new video game, “Need for Speed: The Run,” Christina Hendricks tells USA Today she thinks Joan would play, “Not at the office, but definitely at home.”

• MSNBC chats with Christina Hendricks about her first foray into video game acting.

• Christina Hendricks discusses with WebMD her “stalwart belief that a life well lived — professionally and personally — entails confidently embracing oneself and the world.”

• In a Telegraph profile of L’Wren Scott, Christina Hendricks explains that she likes the designer’s clothes because: “She designs for how women want to look and for what men want to look at.”

• A pair of Boston authors have written a Mad Men-centric cookbook, The Un-official Mad Men Cookbook: Inside the Kitchens, Bars, and Restaurants of Mad Men, the Boston Herald writes.

• Joshua Jackson suggests to TVLine that Jared Harris is returning to FOX’s Fringe, though the show’s executive producer tells Give Me My Remote he doesn’t want divulge spoilers.