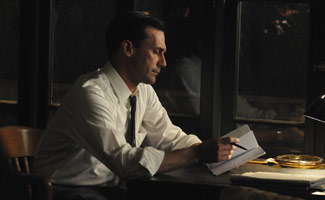 Matthew Weiner and Janie Bryant are honored with awards for their work on Mad Men, while cast members resurface in video games and on the big screen. Read on for more Mad Men news.

• The Wall Street Journal reports on Jon Hamm presenting Janie Bryant with a Hamilton Behind the Camera Award for costume design.

• According to The Hollywood Reporter, Matthew Weiner is one of four recipients of this year’s Brandon Tartikoff legacy award from NATPE.

• The Hollywood Reporter calls Mad Men one of the “greatest cable series in recent memory” and uses the series as an example of TV shows that enjoyed ratings gains over time.

• Boomtron has a behind-the-scenes look at the “Need for Speed: The Run” video game trailer which features the voice of Christina Hendricks.