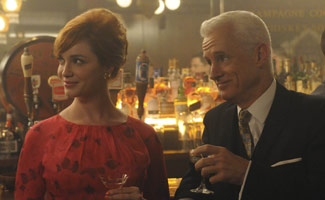 This week’s Mad Men news? Emmy coverage convtinues with votes of confidence for John Slattery and Christina Hendricks; Hendricks also discusses the outfit she’ll be wearing to the big event. Read on for more.

• In the Emmy race for Outstanding Actor in a Drama, TVFanatic.com says, the edge “has to go to the Mad Men star” John Slattery.

• Christina Hendricks reveals to People Weekly that her dress at the Emmys will evoke “Old Hollywood glamour.” [No link.]

• Series creator Matthew Weiner claims he’s “been mostly Peggy in [his] career” in an interview with Daily Beast.

• The New York Times offers recommendations to fans awaiting Season 5 of Mad Men, including the novel The Man in the Gray Flannel Suit and the movie The Sweet Smell of Success.

• The Hollywood Reporter notes that Mad Men has received a Hollywood Post Alliance nomination in the category of Outstanding Color Grading, Television.

• CNN International continues coverage of Fall TV airwaves, which they say will be filled with Mad Men “copycats,” such as Pan Am and The Playboy Club.

• NYULocal.com also notes that “Mad Men is everywhere” in the TV lineup, citing Fox’s Pan Am and NBC’s Playboy Club.

• Bloomberg.com cites Mad Men in an article about smoking on screen, saying it’s “an important part of movie mythology.”

• The Kansas City Star quotes AMC president Charlie Collier on the success of Mad Men and AMC’s other originals: “We’re above the timberline now. Things we’re doing are getting noticed.”

• GoodMenProject.com references Mad Men in a story about the rise of domineering masculine characters on television.

• The Arizona Republic picks its favorite pieces from the Banana Republic collaboration to help readers “channel Betty, Peggy, and Joan.” [no link]