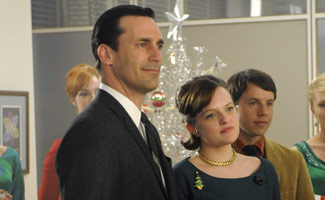 This weekend, the Academy of Television Arts & Sciences held the 2011 Creative Arts Emmys and Mad Men walked home with the award for Outstanding Hairstyling for a Single-Camera Series for the Season 4 episode “Christmas Comes But Once A Year.”

The award was presented to Department Head Hairstylist Sean Flanigan and his team, who together beat out hairstyling teams
from HBO’s Boardwalk Empire and Game of Thrones, and Fox’s Glee. Mad Men has received this award twice previously, for Season 2’s “The Gold Violin” and Season 3’s Episode 8, “Souvenir.”

Mad Men and The Killing are both up for Primetime Emmy Awards which will be broadcast this Sun., Sep. 18 on
FOX.