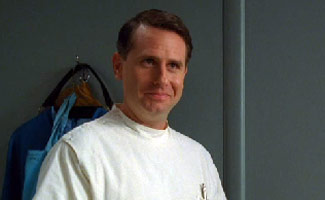 Q: In the first episode of Mad Men that viewers ever watched, you’re shown on screen smoking a cigarette in the examining room. Tell me a little about this moment.

A: It’s funny it’s such a memorable scene… whenever I tell anybody I was on the show and they ask me who I was, I say I was the smoking gynecologist and everybody knows who that is. I think it signaled that what the show was doing was really interesting.

Q: What did you find compelling about Dr. Emerson as a character? Did you model him off any particular doctor from your past?

Q: The majority of Mad Men takes place in a time period before you were born. How did you relate to this era?

A: Some of the younger women in this show would be contemporaries of some of the older women in my life and I think I had a sense of the shifting ways in which men and women relate. The second time I was on the show was with Christina Hendricks [who plays Joan]: Dr. Emerson has a much more personal and intimate relationship with her and there’s a greater equality between them. Over the course of a few years it’s as if he’s treating women now with a little more respect.

Q: While the characters on the show don’t speak with an accent, was there a different way you prepared to talk like a character from 1960s?

A: It’s not so much accent but word usage. Like Dr. Emerson says in the first episode [about birth control]: “Don’t think you have to go out and become the town pump just to get your money’s worth.”

Q: Your father and sister are both actors. Tell me a little bit about what it’s like to be from an acting family.

A: To me it’s almost more interesting if your father sells automotive parts and you somehow end up in the entertainment business — how did you get there? For me the apple didn’t fall that far from the tree. It’s the family business. You don’t spend that much time talking about it.

Q: Your father played Odo on Star Trek: Deep Space Nine, one of the most iconic TV series in history. Mad Men has developed a similarly devoted following. Do you see any similarities between the shows?

Q: There was a time when audiences were more interested in shows about the future and now there’s a stylistic shift towards all things retro…

Q: Dr. Emerson gives Peggy a lot of paternal, unsolicited advice. Can you give a young actor some similarly unsolicited guidance?

A: I would say focus, commit, have a thick skin and don’t take it personally. There’s always the next thing. And have fun.

Click here to read an interview with Christina Hendricks, who plays Joan on Mad Men.