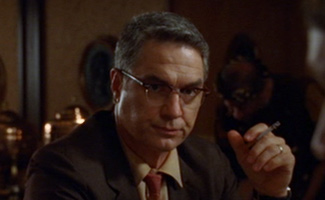 Jerry O’Donnell, the actor who plays Peggy Olson’s brother-in-law on Mad Men, talks about almost having an out-of-body experience on the set and how his experience in the military informs his work as an actor.

A: I had originally auditioned for another role. [Series creator Matthew Weiner] was in the room and he asked me about my experience in the army, and I served in Panama, so when I came back for the next audition he said “our man in Panama!” His attention to detail is, as you know, acute. They steered me towards this role.

A: I was born in Brooklyn, in Coney Island Hospital which is no longer there… My mother is the youngest… Eight brothers. They fought in World War II and they were all like iron workers and that type of thing. So I’m from a real blue-collar background. We were very Catholic and conservative… Kind of where Gerry is, you work hard, you kind of party hard… You have that one suit for weddings and wakes… My grandmother lived in Maspeth, Queens and [Gerry’s] house on the show looks exactly like it. I mean they have it perfect. It was almost like I had an out of body experience, when I walked on to the set.

Q: What was being on such a decked-out set like?

A: It’s almost like playing something as a kid, you really feel like you’re stepping out somewhere in a foreign land where you’re not really supposed to be.

Q: If you had to explain to somebody in the ’60s why the era is popular in the future, how would do that?

A: I think it was one of the big social upheavals in our lifetimes. It was taking place at warp speed then. Peggy’s arc, getting out of Brooklyn and moving into Manhattan was a big deal, even when I did it. You feel different, you feel like you individuated into your own person.

Q: What’s the costume experience like for a man?

A: It’s funny, when you go through the wardrobe process, you always want to pick out the clothes that will make you look the coolest, but that’s not really [the costume department’s] job. With Gerry I’m supposed to have clothes that are probably a couple seasons out of style, because we are really representing the life that Peggy left, how she’s climbing out of the boroughs into Manhattan.

Q: In Mad Men, you have a pretty legendary mother-in-law (Peggy’s mother). Do you have in-laws now? Do they compare?

A: I don’t think anybody could compare. She’s formidable! My mother-in-law now is fantastic. She was a runway model during this time in New York. She always talks about how much they get right on Mad Men.

Q: Does Gerry remind you of anyone you know or used to know?

A: I’m almost the exact opposite. We were raised so much on work ethic. And having been in the military and that kind of thing, you do have aches and pains but you don’t ever indulge them.

Q: In Season 4 Episode 7, “The Suitcase”, Peggy stands up her own dinner party to stay at the office. Have you ever yourself been stood up by anybody?

A: I have not. It’s been the other way around, unfortunately. And just because of being late, or overextending oneself.

Q: How does your experience in Panama relate to your acting now?

A: It comes back again to a work-ethic thing. I’ve had friends who’ve driven cabs, or waited tables and that kind of stuff and they say, “I’m gonna be crappy at this job but when I get a job on TV or in film I’m going to be great.” I don’t think you can turn that switch off… The military does teach you if you put the work in, you get a better result. It’s not a magic trick. I’m glad I did it because it also brought me outside of the country for two years… The more that I know of life, the more that I can give as an actor. My wife always said try to be interested more than you are interesting. And you do learn a lot in life that way.