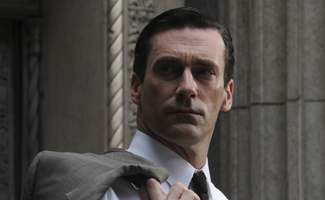 This week in Mad Men news, Daily Mail captures a bearded Jon Hamm on the streets of NYC and  Christina Hendricks spills her secrets for staying healthy and confident. Read on to find out which new movies star Abigail Spencer (Suzanne) and more.

• Daily Mail posts pictures of Jon Hamm as he goes incognito on the streets of New York.

• Christina Hendricks tells Everyday Health how she stays healthy, sexy and confident. One tip: Exercise with a buddy.

• TV Line showcases video of Hendricks’ “moment in the kudos spotlight” as she accepts her Critics Choice Television Award.

• Metro NY interviews Michael Gladis about his roles on Mad Men and Leverage. Gladis reveals a desire to avoid being typecast and to “play a moron at some point.”

• CNN Money says AMC’s Mad Men generates “water cooler chatter” and is one of the reasons the company’s stock is so attractive.

• The San Francisco Chronicle credits Mad Men as one of the shows that “have helped propel AMC from a movie channel to a bastion of original programming.”