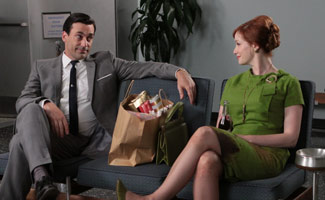 This week, Mad Men created a buzz as the media discussed this year’s upcoming Emmy awards and the show won repeatedly at the Critics’ Choice Television Awards. Additionally, Christina Hendricks announced plans to design a swimwear line. Read on for more of this week’s news.

• Deadline Hollywood points out that Mad Men could be the first series to win four consecutive Outstanding Drama Emmys, and that Jon Hamm once again has a good shot at snagging one for Best Lead Actor.

• The Hollywood Reporter also mentions Mad Men as one of the major contenders for this year’s Emmy nominations.

• The Huffington Post reports on Lucky Magazine‘s interview with Christina Hendricks in which she reveals a desire to design her own swimwear line.