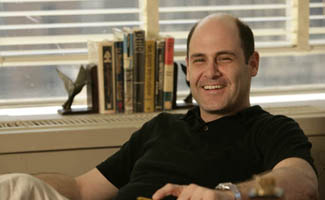 In Mad Men Emmy news, The Hollywood Reporter states that series creator Matthew Weiner’s talent extends to his work as a director, making him a frontrunner for the Outstanding Director for a Drama Series Emmy. Meanwhile, in the New York Post, Kiernan Shipka is be lauded as her generation’s Meryl Streep. Read below for more Mad Men News.

• Matthew Wiener is highlighted in The Hollywood Reporter as a contender for the Outstanding Director for a Drama Series Emmy for his work on the Mad Men episode, Tomorrowland

• The New York Post describes 11-year-old Kiernan Shipka, who plays Sally Draper on Mad Men, as a clone of Meryl Streep and talks with her about what her hopes and expecations are for Season 5.

• In an interview with Parade magazine, Christina Hendricks discusses her Goth style as a teenager. About Mad Men, she adds, “I know how lucky I am, and I don’t take it for granted”.

• In The LA Times, Mad Men creator Matthew Weiner talks about how he instantaneously knew Elizabeth Moss was perfect for the role of Peggy.

• Because of Mad Men’s TCA Award nominations, EntertainmentWeekly.com predicts that the series is a frontrunner for this year’s Drama Series Emmy.