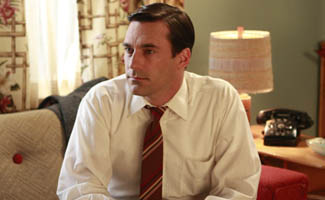 This week in Mad Men news, the media reports that Jon Hamm has finalized a contract extension with the show. Additionally, Mad Men and Banana Republic have joined forces to bring the series’ vintage chic fashions to the modern consumer. Read on for more.

• The news that Jon Hamm has renewed his contract for three more years has been covered across the web and in major publications including The New York Times, The Hollywood Reporter, Variety, The Chicago Tribune and The Wall Street Journal.

• Check out fashionista.com for photos of the Banana Republic Mad Men collection.

• With Season 4 of Mad Men concluding in 1965, creator Matthew Weiner tells TV Line that he won’t rule out entering the 1970s in future seasons.

• Watch ModCloth.com’s interview with Mad Men costume designer Janie Bryant, where she discusses the fashions seen on the series as well as her recently published book.

• Jon Hamm is not just an award-winning actor — he’s also a long-time NHL fan, and Lainey Gossip has the video proof: Hamm presented the Vezina Trophy at the 2011 NHL Awards Show.

• ThePitch.com states that Jon Hamm will play in a celebrity wiffle-ball game to support Children’s Mercy Hospitals and Clinics.

• Deadline.com predicts that Mad Men’s Season 4 episode “The Suitcase” is in the running for a 2011 Emmy nomination.