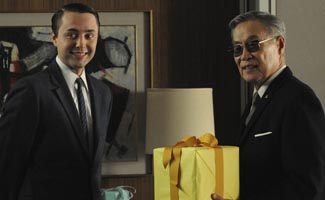 With Father’s Day coming up this Sunday, you can always turn to Mad Men if you’re looking for gift ideas. Below are eight suggestions — pulled from all four seasons — to fit every budget. (Let’s assume dad already owns Mad Men DVDs, CDs, and a 2011 calendar.)

1. Breakfast (Season 4, Episode 9, “The Beautiful Girls”)
Runaway Sally wants to live with her dad in the city. To butter him up, she makes French toast topped with rum. Sally mistook the liquor bottle for Mrs. Butterworth syrup but a boozy breakfast at home is not necessarily a terrible idea. Cost: $

2. Instant Camera (Season 4, Episode 2, “Christmas Comes But Once A Year”)
At the SCDP Christmas party, Roger presents Lee Garner Jr., the firm’s most important client, with an instant camera that Garner immediately puts to use by taking pictures of a reluctant Roger in a Santa suit. That featured camera isn’t on the market anymore but you should be able to find a fairly cheap facsimile on eBay. Cost: $$

3. Cuff Links (Season 1, Episode 3, “Marriage of Figaro”)
Rachel Menken picks up Don’s broken cuff link in the middle of a meeting. Later, she treats him to a brand new pair (shaped like medieval helmets) while giving him a tour of her family’s department store. Can you think of a better way to tell your dad he’s your knight in shining armor? Cost: $$-$$$

4. Whiskey (Season 4, Episode 5, “The Chrysanthemum and the Sword”)
“Please accept our modest gifts,” Pete says with a bow, as he hands a cantaloupe to a Honda exec and a bottle of whiskey to his subordinate. (The assistant wisely swaps gifts with his boss soon thereafter.) You can rarely go wrong with Whiskey; cantaloupes are less recommended. Cost: $$-$$$

5. Sporting Event Tickets (Season 4, Episode 7, “The Suitcase”)
When Harry snags free seats to a live broadcast of the Cassius Clay vs. Sonny Liston fight, he gifts the tickets to a select few. Based on the excited reaction of his coworkers, imagine how glad your dad would be to get good tickets to a LIVE event. Cost: $$$

6. Monogrammed Watch (Season 2, Episode 3, “The Benefactor”)
After a night with Bobbie Barrett, Don comes home to a small surprise from Betty: She’s had his watch repaired and monogrammed. If your dad’s watch isn’t broken, simply get him a fancy new timepiece personalized by an inscription on the back. Cost: $$$

7. Television Set (Season 3, Episode 4, “The Arrangements”)
When Peggy announces she’s moving to Manhattan, she softens the blow by giving her mom a new TV set. Can you think of a better way to watch Mad Men with your dad than on a brand new flat-screen? Cost: $$$$

8. Convertible (Season 2, Episode 7, “The Gold Violin”)
After landing the Martinson Coffee account and being invited to join the board of the Museum of Early American Folk Arts, Don rewards himself with a brand new car. If you’re a father yourself, Father’s Day is the perfect day to treat yourself right. If a luxury car sounds extravagant, think of it as a long-term investment for a hard-working dad. You deserve it! Cost: $$$$$